Eritrea: Another Venue for the Iran-Israel Rivalry

The tiny country of Eritrea has been accommodating two Middle Eastern rivals in order to face its geopolitical challenges — mainly its fear of invasion by Ethiopia. Iran wants to expand its presence in Eritrea and other East African nations in order to gain influence along the Red Sea, an important route for seaborne international trade. Israel, meanwhile, wants to monitor Iranian activities in the region. By allowing foreign security operations in its territory, Eritrea has become another venue for Israel and Iran's ongoing rivalry.

Eritrea operates under two key geopolitical constraints: multiple security concerns and a weak economy caused by the country's small size and population (5.2 million in 2011, according to the United Nations) and lack of natural resources. The war-torn country has few options for satisfying its economic needs.
Since gaining independence from Ethiopia in 1991, Eritrea has fought wars against Yemen, Djibouti and Ethiopia. The war with Yemen was sparked by territorial claims over Greater Hanish Island in the Red Sea. In its conflict with Djibouti, Eritrea claimed ownership of the Ras Doumeira mountains along the coast. 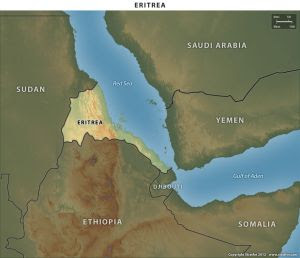 Eritrea has faced an existential security threat since independence: invasion by Ethiopia. This concern grew after the United States allied with Ethiopia and diplomatic quarrelling froze relations between Washington and Asmara in 2001. The overwhelming fear that Ethiopia would invade to recover its lost territory has led to high levels of conscription into the Eritrean military. More than 10 percent of the country's population, including older citizens, now serves in the military or in a reserve force. The constant possibility of an Ethiopian invasion has put Eritrea in a seemingly endless state of emergency.

For Eritrea, the most pertinent security concern is Ethiopia's strategic interest in regaining a port on the Red Sea. Following independence, Eritrea held the ports of Assab and Massawa, while Ethiopia, a country of nearly 90 million people, became landlocked. Assab is located in Eritrea's far south, roughly 161 kilometers (100 miles) from the Ethiopian border, near the home of numerous Afar tribes (indeed, most Afars live in northeastern Ethiopia). Ethiopia-backed Afar rebels make up Eritrea's main armed opposition group and demand independence. The goal of retaking Assab is popular goal among Ethiopia's political elite and a common issue in the country's political discourse.
Moreover, Eritrea and Ethiopia fought a bloody war from 1998 to 2000, and tensions along the border remain. Eritrea lost the war, in which 70,000 people were killed, but it repelled the Ethiopians and safeguarded its independence from Addis Ababa. Both countries have troops stationed along the border, and Ethiopia launched three attacks in southern Eritrea in March.

Turning to the Middle East

Eritrea's imperative is to maintain its significance and acquire defensive measures from willing Middle East countries to maintain its independence from Ethiopia. Facing years of continuous isolation from its African neighbors and from the United States due to its alleged support for Somali Islamist groups, Eritrea has turned to the Middle East for alliances and assistance. After withholding its participation in the African Union from 2004 to 2011, Eritrea became an observer member of the Arab League.
Iran, Qatar, Saudi Arabia and Egypt are becoming close allies of the small African country. Iran has supplied arms and training to Yemeni al-Houthi rebels located along the Eritrean territory coast. This piqued Saudi Arabia's interest in Eritrea, since Riyadh wants to deter the rebels. Qatar, which wants to exercise influence in East Africa, mediated the Eritrea-Djibouti border dispute.
In exchange for resources, possibly including modest amounts of cash and weapons, Eritrea has exhibited a willingness to become a base of support for Middle Eastern powers that want to exert greater influence in the Horn of Africa. As a result, Eritrea and its waters in the Gulf of Aden have become another venue for Iran and Israel's rivalry. Israel and Iran's engagement with Eritrea is an extension of their rivalry over the Red Sea, which allegedly led to the bombing of the Yarmouk weapons factory in Sudan.

In 2008, Tehran struck a deal with Asmara to maintain a military presence in Assab — officially to protect the state-owned renovated Soviet-era oil refinery there. In return, Asmara received cash and other military support from Tehran through official and unofficial channels. In 2009, the same year in which Eritrea openly supported Iran's nuclear program, the Export Development Bank of Iran transferred $35 million to support the Eritrean economy.
Iran's operations in Eritrea are relevant to Tehran's larger goal of controlling the Bab el Mandeb strait and the water route to the Suez Canal. Moreover, naval ships from a dozen Western and other countries are stationed just miles from Assab to fight piracy in the Indian Ocean and conduct other security operations in the region. The United States and France have large bases in Djibouti, near Assab. Thus, Iran's presence in Eritrea could be more significant in terms of intelligence gathering than tactical defense.
Israel also operates inside Eritrea. According to Stratfor diplomatic and media sources, Israel has small naval teams in the Dahlak archipelago and Massawa and a listening post in Amba Soira. Israel's presence in Eritrea is very focused and precise, involving intelligence gathering in the Red Sea and monitoring Iran's activities. Various Stratfor diplomatic sources have said that Israel's presence in Eritrea is small but significant.
Asmara wants Israel's friendship for numerous security and political reasons. Eritrea wants to use Israel to influence the United States — an ally of both Israel and Ethiopia — in decisions regarding Eritrea on the international stage. The country also wants to acquire better air defense capabilities to defend against a possible attack from Ethiopia. Moreover, cooperating with Israel is a way for Asmara to balance its controversial relationship with Tehran.
However, Israel has good relations with both Eritrea and Ethiopia and is less interested in expanding its presence in Eritrea than Iran. Israel would not want to harm its relations with Ethiopia and other regional countries, as it has a wider interest in East Africa — mainly containing Sudan's Islamist government, which allegedly supports Hamas and other anti-Israeli elements in the Middle East. As Israel has expanded its security cooperation with South Sudan and Kenya in recent years, Eritrea has responded by strengthening its ties with Iran.
Eritrea's decision to accommodate Israel and Iran is not an ideological choice. It is a way for a small and insecure nation to meet its economic and security needs.