Navy To Increase the Number of Deployed Ships to the Middle East, Asia

The Navy plans to increase the number of its deployed ships by more than 20 percent over the next five years, providing the U.S more firepower and assets in the Middle East and Asia to meet security demands, Pentagon officials say.

The plan laid out in a new maritime strategy announced Friday reflects the military’s growing concern about the unpredictable pace of conflicts arising around the globe. It particularly emphasizes the Navy’s need to prepare for future conflicts against adversaries with high-end weapons that are difficult to penetrate.

The strategy calls for deploying the Navy and Marine Corps’ newest equipment: the Littoral Combat Ship, F-35 Joint Strike Fighter, Triton surveillance drone and MV-22 Osprey to the Asia-Pacific region, an area when the Navy already plans to base 60 percent of its ships. These types of systems have not been needed in the counterinsurgency-type wars in Afghanistan and Iraq over the past decade.

“It’s about … being able to project military force into contested areas,” Rear Adm. William McQuilkin, director of the U.S.Navy’s strategy and policy division, said this week.

The strategy gives a clear sense of the combined priorities of the Navy, Marine Corps and Coast Guard, said Maren Leed, analyst with the Center for Strategic and International Studies who has advised top military generals and former staffer for the Senate Armed Services Committee.

“It accurately reflects a much greater sense of collaboration which is producing a more coherent way ahead across the Department of the Navy,” she said.

It is the first update of the document since 2007 and brings the Navy’s mission in line with the Pentagon’s overall military strategy, Navy officials say.

“Violet extremist organizations like [Islamic State militants] have grown; we have a continued threat from North Korea and Iran,” McQuilkin said of the global security threats. “We’ve seen the recent Russian aggression and of course we have the question of the rise of China.”

A key aspect of the strategy is having more ships deployed and basing more of them outside of the US.

The Navy has about 275 ships, 97 of which were deployed in 2014. That number will increase to 120 by 2020, a time when the Navy’s fleet is expected to total more than 300, according to the new strategy. In the Middle East, the number of U.S.ships will increase from 30 to 40 over the next five years. 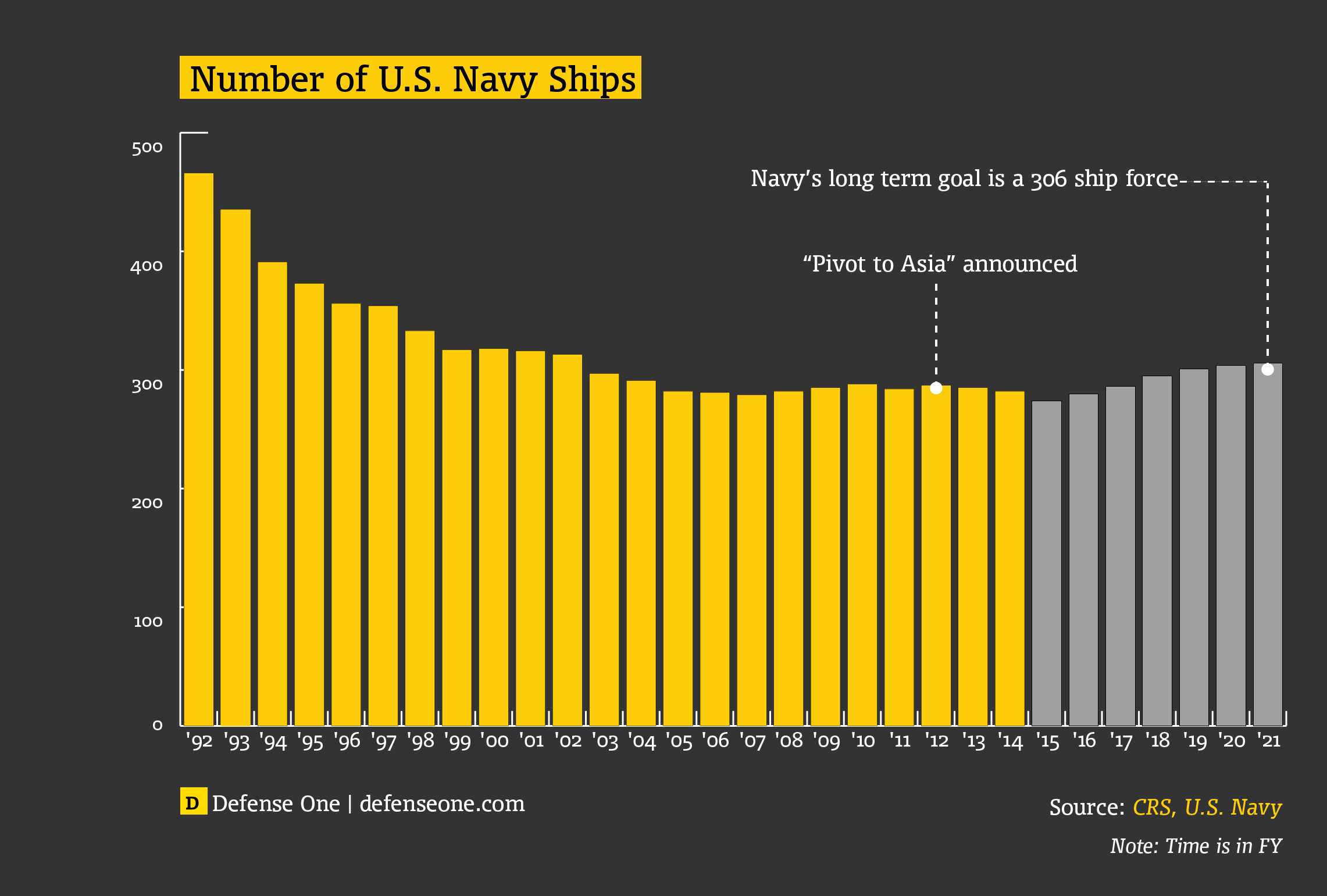 Brig. Gen. Kevin Killea, director of the Marine Corps futures directorate, said there currently are not enough Navy ships that exclusively carry Marines. The strategy calls for a total of 33 amphibious ships. Right now there are fewer than 20 in deployable status, he said.

“We don’t have enough ships,” Killea said. “We have a mandate to do power projection, to protect America’s interest forward and until those requirements change, we have a requirement for a certain number of ships.”

Without those extra ships, “we work around it,” Killea said.

“But that doesn’t mean that we don’t need that number to most effectively carry out the mission,” he said.

Support from Congress is the only way to get the desired number of ships, Killea said. And in this the current political environment, where budgets are tight, it will not be easy.

“If we don’t [get support], then we will have to review our commitments as a nation,” he said.

The strategy talks about a plan to “increase forward-basing of forces” a concept that might not be popular with Congress.

Marine Corps Commandant Gen. Joe Dunford, speaking at a Center for Strategic and International Studies, or CSIS, event on Friday, said some of that forward-basing capability will be in Europe.

“With the complexity of the security environment comes extraordinarily increased demand for combatant commanders,” Dunford said. “We can not buy our way out of the security problems we have right now … meeting that demand will require us to do things differently.”

The forward-basing component could be “politically challenging domestically,” Leed said. “That tends to mean fewer things inU.S. states, which is never a popular approach, but it’s the operationally right thing to do.”

The strategy also places an emphasis on modularity, or the ability to change the ship and personnel capabilities for each mission, which “will define our future force.” But Leed says the Navy needs to better articulate how it intends to use modularity in its future fleet.

“We need to have a clearer concept of what the balance is between inherent to the platform and modular,” she said. “The answer to the most efficient and effective balance for any given thing is going to vary a lot.”

The Coast Guard is looking at deploying more equipment to the Caribbean and eastern Pacific to intercept drug traffickers as the Navy focuses outside the region, said Rear Adm. Peter Brown, assistant commandant for response policy.

Marine Corps Gen. John Kelly, commander of U.S. Southern Command, said at the Pentagon Thursday that the Coast Guard plans to double the number of cutters in the Caribbean in the coming years, if budget fighting in Congress over sequestration cuts permits.

The strategy also places an emphasis on collaborating with allies and partners, but that could only go so far, Leed said. “The cooperative activities are good to a point, but we haven’t yet, and we may never get to the point where we actually … replaces so of what we’re willing to do,” she said.

Like many of the Pentagon’s strategies in recent years, this one comes with budgetary caveats. If budget caps remain in place, the Navy would have “increased levels of risk for some missions,” decrease forward presence and reduce its footprint in certain regions, the strategy states.

When asked at the CSIS event on Friday about the degree to which the strategy reflected China, Chief of Naval Operations Adm. Jonathan Greenert said China was “a large part of it.” He added that the Navy was looking for multilateral and tactical opportunities to cooperate with China’s navy.

“There is U.S. commitment in the region,” added Dunford. “Certainly we want that to be part of China’s calculus.”