Swarms of stinging jellyfish have invaded the beaches of Israel and the eastern Mediterranean, wrapping their painful tentacles around the limbs of unsuspecting bathers who ventured too far into the water.

The unwelcome visitors, who arrived in early summer, were gone within a few weeks, but these nomad jellyfish -- Rhopilema nomadica -- are a symptom of a much bigger problem.

They're not supposed to be here -- or anywhere along the Levantine basin or the eastern Mediterranean Sea for that matter. In fact, they are natives of the Indian Ocean, thousands of miles away.

Marine biologist Bella Galil says they came through the Suez Canal -- just one of a number of invasive species now making their home in the Mediterranean.

"We have this corridor pushing in all the alien species, who just push them out and replace them with a fauna, which is not the native one," says Galil, a marine biologist with Israel's National Institute of Oceanography.

Invasive species like the nomad jellyfish replace the region's native marine life, changing the ecosystem and the environment dramatically -- and quickly.

And Galil predicts the problem will only get worse with the recent expansion of the Suez Canal.

Take the marbled rabbitfish, for example. It eats only algae, which sounds innocent enough. But it earned its quirky name because of its procreation habits: It reproduces like -- you guessed it -- a rabbit. And the enormous schools of rabbitfish that form as a result can quickly strip a habitat of all its algae.

"The habitat is cut like a forest," says Galil. "Nothing could exist and those species lose their place in the Mediterranean." 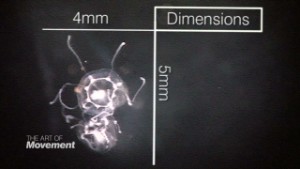 The newly-enlarged Suez Canal is forming a superhighway for invasive species, Galil says: "It's becoming a corridor for invasion. A one-way corridor of invasion."

Each invasive species disrupts the food-chain and changes the underwater environment.

The canal used to have its own natural hurdle to help prevent "invasions" -- a series of saltwater areas called the Bitter Lakes; far saltier than the surrounding water, the lakes prevented most marine life from passing through the Suez Canal.

But Galil says recent expansion works did away with this natural barrier, making it much easier for marine life to travel from the Red Sea to the Mediterranean, carried on the current which flows north for most of the year.

Some of the invasive species are beautiful, but potentially deadly: the devil firefish, for example, whose numerous spines contain venom. Or the striped eel catfish, which has venomous spines running along its fins. 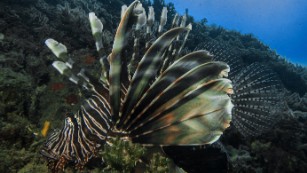 "You can see that there is less life," says underwater photographer Hagai Nativ, "With every year passing, we see more species of fish, more species from the Suez. We know that they are coming from the Indian [Ocean] ... through the Suez Canal."

Nativ makes a living filming these creatures. He says he benefits from the new fauna coming in.

But the invaders are no gift to the ecological balance of the Mediterranean, which can't adjust as fast to the changing world around it.